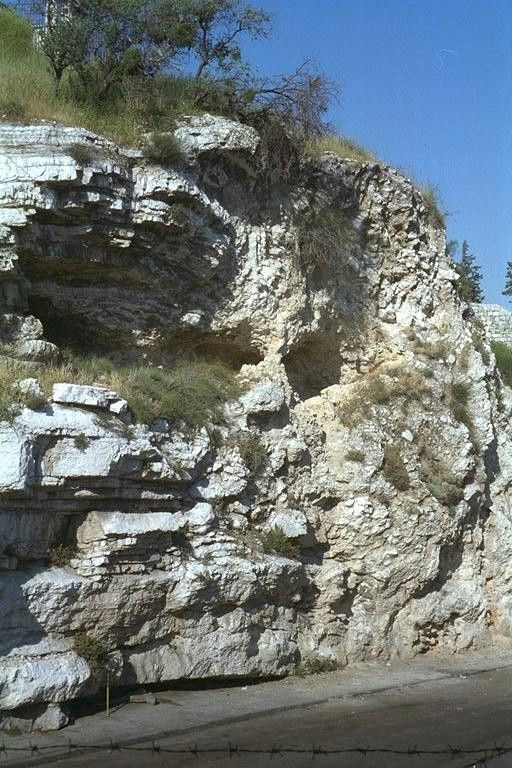 As with many places mentioned in the Bible, it is impossible to be certain of their locations today.  Where Jesus was crucified on the cross is one of those unknown locations.  A Roman Catholic Church named The Church of the Holy Sepulcher has been built over the spot where some believe the crucifixion, and eventual burial of Jesus, took place.  Others believe that the crucifixion took place on the Mount of Olives itself.  Another possible location, shown above, is just north of Jerusalem’s old city walls.  The spot is called “skull hill” because some people believe they can see the shape of a skull in the rocks on the cliff.  It is also known that the Roman Empire carried out executions on this hill.

Have you been following the Footsteps of Jesus? Since Epiphany, each 2020 worship bulletin cover has had a picture of a location in the Holy Land that tied into that day’s Gospel reading. The pictures show the probable locations of the baptism of Jesus, his days of ministry to the people, and more. These photos will continue through to Trinity Sunday as we explore the life of Jesus and its meaning for us today.  To see the rest of the photos in this series, click HERE.

The schedule below is tentative and may be subject to change.  We are doing our best to get back to “normal” while still staying safe.  Worship services are being held in the Sanctuary AND posted online, so those who are staying home can join with us.  For now, the Sunday school lessons are still just online.  To view our online content, click on “Online Worship Services” in the menu above.